So we rocked up at Gosport on Friday, had some practice rolled into Saturday with DF65 that seemed to be off the pace, having thought I was well on it. Turns out that I’d stuck some rig bits in the wrong place, the wind wasn’t where I thought it was plus other racing driver excuses. Not the best day at the office. Sunday was a better day with the purple “Wonkaboat” doing it’s thing and a second spot finish out of the 52 skippers was pretty pleasing for the first proper outing for the new outfit. 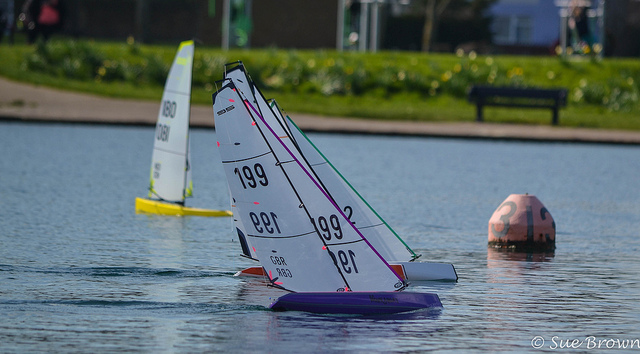 Back at base I took a look at the 65 rig and worked out where the issue was, built some new booms up and hey presto I think we have the issue sorted. I also decided that purple is pretty fast but there are no purple 65 hulls until July so I have added my own purple to what is now called “Wonkaboat Jnr” The fleet matches…result!

We also collected our new RG65 from Alex Cory (he builds lovely boats by the way) and we are now trying hard to get it ready for the next round of the RG65 TT series which is in 7 days time at Bournville, lets see if we can get that sorted!