So we’ve settled in to life aboard HMS Treehouse and we’ve almost got everything just where we want it which is making production a bit easier. On the production front we are now able to process and ship most orders within 7 days unless we are desperately short of something or we are out of the office……..such as below!

We have a couple of interesting weeks coming up with our annual trip out to the Nuremberg toy fair happening next weekend and the first of the DF Racing TT events happening the weekend after, this, combined with it being my birthday tomorrow means that we will have two short production weeks. Two or three days this week and three days the week after, but we seem to have most of it under control.

In other news there is some light at the end of the RC Laser tunnel and we are hoping to be resupplied within the next two or three weeks with boats and bits, which is great. Whats not so great is the price increases we have had forced upon us by the distributor, some of the smaller items have stayed the same but there are price increases on most items, including boats, sails, masts etc and whilst this isn’t great news it is the first real review that they have done of the pricing for around 5-6 years. We have adjusted our prices accordingly.

On that note it’s that time of year where Sundays involve an open fire and a pint so that’s where I’m off to! Happy Sailing!

Below are a few sails we’ve manufactured and shipped recently and a nice view of the boatyard from the top of a very wobbly manlift basket! 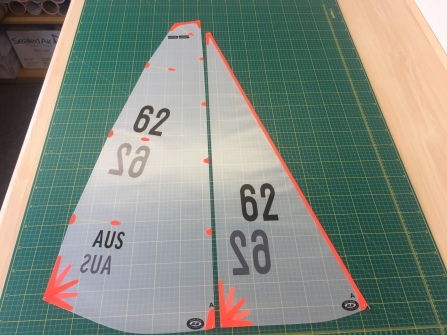 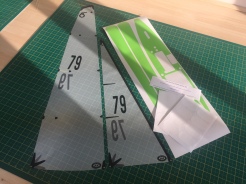