We’ve all been there, arrived at a dual class event and dilly dallied about what to sail then made your mind up right at the death to sail the class with less numbers to make the event look better than it might otherwise have been.

This was the case on Sunday when I travelled up to West Lancs YC for the joint DF65 and RC Laser event, with 15 Lasers and only 5 DF’s I elected to sail the DF and duly rigged up which was fine until I realised I had only packed my test suit with the draft stripes.  No logo, no number, no national idents….bother.

No worries, someone had a pen so I hastily added what was needed, not entirely sure we were absolutely class legal but we did have a number, logo, national ident and even a smiley face.  I have to say that the draft stripes did make it much easier to judge what the rig was doing from a distance. 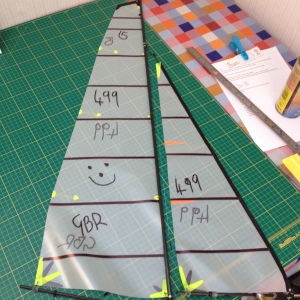 Some unorthodox sail numbering but I think I nailed the RG logo!!

The racing was fun with very little wind at times which meant that so long as your boat was moving you were doing alright.We did some rig tuning for some of the competitors which gave their boats more feel and better acceleration and made them more competitive. Second and third places were decided on countback as both were tied on 19 points and first was taken by myself with 10 wins from 10 races, although it was closer at times than the result suggests.

Soch Sails were placed first, second and fourth which was good, Fleetwood next weekend where we might have some properly numbered sails….